Gerrard was named as the 2009 Football Writers' Association Footballer of the Year, beating Ryan Giggs by just 10 votes and becoming the first Liverpool player to win the award in nineteen years. Gerrard was delighted and "a little bit surprised" to win the award. On 5 December 2009, Gerrard made his 500th appearance for Liverpool in a 0–0 draw at Blackburn where he was accused of diving in an attempt to win a penalty. He ended the 2009–10 season with a total of 12 goals and nine assists from 46 matches. 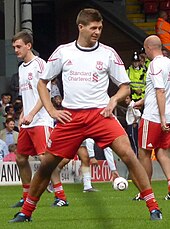 Gerrard before Jamie Carragher's testimonial in 2010

Following the 2009–10 season, Rafael Benítez departed Liverpool after six years and was succeeded as manager by Roy Hodgson, who quickly assured fans that Gerrard would not be sold. To further eliminate any speculation surrounding his future at the club, Gerrard made a statement emphasizing his excitement at the coming season with Liverpool and praising the signing of Joe Cole. Gerrard soon played his first pre-season match of the 2010–11 season against Borussia Mönchengladbach on 1 August 2010 alongside new signing Joe Cole.

LAST TERM BY COACH RAFA BENITEZ
Rafael Benítez was the club's manager, this being his sixth season in charge. His association with the club would also end at the end of the year